There can be few boomers who do not remember the amazingly creative, and ground breaking for their time, Gerry Anderson TV shows. Gerry was influential on our TV screens from the early 1960s right through to the first decade of the new millennium, and if truth be told he has continued to have a huge following amongst Boomers long after his death in 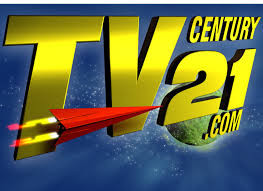 This is a potted history of some of his best known creations, some of which, you may either have forgotten about or are at the younger end of the Boomer generation envelope and didn’t get to see at all.

I have been a fan of Gerry Anderson shows my whole life, and it would therefore probably not surprise you to know, that as an avid collector I also have many of the associated diecast merchandising, which I will use to illustrate this post.

I hope that you get some joy and relive some of your childhood through this article…….

Although Gerry’s first production was The Adventures of Twizzle, 1957, the story of a doll with extending legs who lived in a toy shop, it is largely unremembered, though the writer Roberta Leigh did go on to make other puppet shows such as Space Patrol, which was found in an archive a few years ago and beautifully restored (it is available through Amazon)

Anderson’s first notable hit was the supermarionation(a complex Czech style of marionette puppetry) production Supercar which ran for 39 half hour episodes between 1961 and 1962. What distinguished this style of puppetry from anything that had gone before it was the technique of using tiny solenoid receivers in the puppets mouth assemblies, synchronised with the production voice tapes, to create a more realistic appearance.

Supercar was a vertical take off and landing vehicle that ran on a cushion of air when not flying and was the centre piece of adventure stories starring Mike Mercury the pilot, Professor Rudolph Popkiss and Dr Horation Beaker, the inventors and builders of Supercar. They would later be joined at the end of the first adventure, by young Jimmy Gibson, and his pet monkey Mitch.

This was the first time that the Anderson trademark launch sequence was seen, but which he developed for subsequent series that will be the subject of the rest of this post.

For Supercar this was the firing of starboard and port engines, activating an interlock, and then the opening of the overhead hangar doors, which would then see Supercar lift off vertically through the roof. The complete series is also available through Amazon.

This series aired between 1962 and 1963 and would be the last of the Anderson black and white productions. It features the spaceship and crew of Fireball XL5, led by Captain Steve Zodiac of the World Space Patrol and their adventures across the galaxy. (Star Trek would later pick up this theme in 1966)

Again 39 half hour episodes would be produced and this series would also mark Anderson’s break into US TV with the
network NBC running it as a Saturday morning staple from 1963 to 1965.

The story is that the name of the series and the rocket ship was inspired by the oil brand Castrol XL. Anderson liked the sound of it so stole XL and put Fireball in front and added a 5 at the back.

The series made by Roberta Leigh in 1962-63 has many similarities and is often confused with XL5, but is somewhat more primitive in its production technique, but still good viewing for those who have an interest in television of that period. Leigh had of course worked with Anderson in the 50s.

For those who want to relive their youth the boxed set of Fireball XL5 is available at Amazon.

Made in 1963 and debuting on British TV in 1964, Stingray took the formula developed in Anderson’s previous two productions and with some more innovation continued the successful run of this type of SciFi story.

The background plot revolved around the combat submarine Stingray piloted by Captain Troy Tempest of the World Aquanaut Security Patrol WASP. He was ably assisted by his navigator and copilot Lieutenant ‘Phones’ Sheridan. They were accompanied on their adventures by Marina a young woman who never spoke and who came from an underwater Kingdom, sometimes visited by Stingray on their many adventures.

This was the very first British TV series to be filmed entirely in colour, with the syndication market in the US very much in mind.

This was also the first of the Anderson series to use removable heads on the puppets which gave them the opportunity to use multiple heads with varied facial expressions. The underwater shots were filmed dry shot through extremely thin aquaria or fish tanks, while the surface shots were done in a water tank which had a lowered back to simulate a horizon effect.

Stingray garnered some generally favourable plaudits over time and has come to be seen as a veiled commentary on the Cold War in general. If you want to relive the excitement of that era you can find the complete set of Stingray episodes at Amazon.

Stingray ran for 39 half hour episodes, a familiar formula by that time but one that was about to change with Anderson’s next and perhaps most famous production

Anderson having steadily improved all aspects of production, as he went from one SciFi series to another, now produces the work that he will become most famous for. Between 1964-1966 Thunderbirds cam to our TV screens.

Anderson had now persuaded his financial backers that he was ready to make 50 minute episodes providing an opportunity to develop and make more use of the characters who were the stars of the show, though in reality I think that most 6-10 year old boys of that time saw the vehicles as the stars LoL.

In the 2060s and launched from a secret base in an undisclosed location in the Pacific the Thunderbirds were operated by ex astronaut Jeff Tracy and his sons Scott, John, Virgil, Gordon and Alan. They formed International Rescue an organisation dedicated to helping those in danger of any kind around the world. 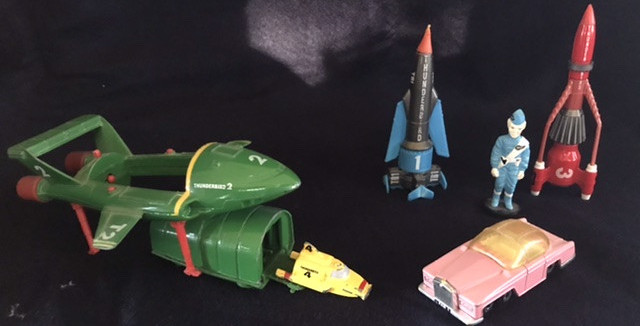 They are supported by Brains a highly intelligent scientist and inventor of the Thunderbird machines. Also in their Employ are a number of agents around the world led by the aristocratic Lady Penelope Creighton Ward, whose voice was provided by Anderson’s wife and former production assistant Sylvia. Lady Penelope has a chauffeur and butler Parker, who we learn is a former jailbird and safe cracker.

Anderson drew his inspiration from a German Minining Disaster where a large bore machine was railed into location and succeeded in rescuing 11 of the trapped German miners. The bore became a favourite piece of equipment that would emerge from time to time from one of Thunderbird 2’s transportation Pods in the Thunderbirds series.

Thunderbirds sadly was not picked up by a US network and was therefore ceased in production after 32 fifty minute episodes in 1964. But since then it has been broadcast in 66 different countries. It lives on in the British/New Zealand remake Thunderbirds Are Go, which first showed in 2015.

If you want to relive the adventures of Thunderbirds there is a boxed series available from Amazon.

Shown now in over 40 countries Captain Scarlet and The Mysterons, to give it the full title, was produced between 1967 and 1968, as 32 twenty-five minute episodes. It was set in a century in the future in 2068, and is about the war of nerves between Earth and a Martian race known as the Mysterons.

Scarlet through a misadventure is imbued with a self healing power of retro metabolism and becomes indestructible making him Spectrum’s ( the organisation fighting the Mysterons) most valuable asset in the fight against the Martians.

This is the first series where the puppets are actually sculpted to more realistic body proportions made possible by the technology advances that made miniaturisation of the speaking mechanism (which supermarionation was famous for) possible.

It is generally considered somewhat more sinister in tone and appealing more to the ‘dult half of the kidult demographic. It has received some criticism for the indestructible story feature but has generally been applauded for the multi-ethnic puppet representations and its view of a Utopian future Earth

Captain Scarlet has been reproduced as an animated series from 2005. The boxed Supermarionation series of Captain Scarlet is available for Amazon for all those who wish to feel the hairs on the back of the neck tingle when you hear that ominous dark voice saying “This is the voice of the Mysterons”

Produced between 1968 and 1969 Joe 90 would be the last successful outing for the ‘heyday’ of Anderson’s supermarionation productions.

The premise of this show is that a 9-year-old schoolboy Joe is able to have McClaine is transformed into a crack national spy after his Father invents a machine that can transfer any knowledge and skill set from an expert to the mind of anyone else. Joe has the perfect cover and the series follows his adventures as a member of the World Intelligence Network (WIN) in the role of its “Most Special Agent”

The series is full of Anderson’s trade mark love for advancing and future looking technology as demonstrated by Joe’s car also invented by his Dad.

The show which ran for 30 episodes garnered much praise for the continuing sophistication and normalised proportions of the puppetry along with the state-of-the-art scale sets and special effects.

Though not Anderson’s most successful series it had a long run with US syndication and a rerun in the UK as late as the 1990s. There has been much chatter about a live action movie but nothing has come of that yet.

The 30 episodes of Joe 90 come as a boxed set from Amazon.

Joe 90 would be followed up by the 1969 series, Secret Service, which was a mix of puppetry and live action that bridged Anderson’s move to life action with the UFO and Space 1999 series which were to follow. It made little impact.

UFO, the Protectors and Space 1999 followed to relative success but they were all live action productions that were a considerable departure from Anderson’s 1960s masterpieces.

While this creative genius had always  aspired, from the earliest days of his TV and film career, to be a serious force, in live action adventure productions, Anderson’s legacy will remain in the hearts of those 5-12 year olds (boys in particular) of that era, who were for 30 to 50 minutes,  transported to the most amazing adventures, each evening, just before dinner or tea time, for the best part of a decade.

It is perhaps the cruelest of ironies that a man so in touch with action and adventure, tragically suffered from dementia in his final years and he departed life’s big adventure, mercifully in his sleep, on 26 December 2012, at the age of 83; His legacy lives on in the minds of numerous Boomers‘ collective memories.

Do You Have A View?

I hope that you found this article of some value. I welcome any feedback or discussion on these pages and I would invite you comments and opinions in the reply section below this post. I always reply within one working day.

Thanks for reading my Blog page, I hope that it was of value.