Here is the link to Part One

In Part One of this story we saw the end of the World War II, the explosion of post-war baby births, the arrival of the Boomers, and the start of the influence they were able to bring to bear from the mid 50’s onward.

Bill Hayley, Elvis Presley and Alan Fried had sown the seeds, for what was just going to become a wilder and wilder ride through the cultural roller coaster that would be the decade of the 60s…….

The 60s Farewell The Fifties 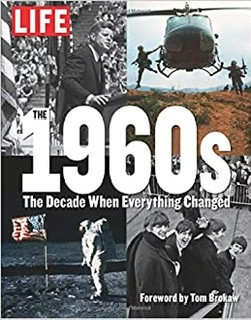 As the 50s came to an end, the new decade of the 60s was gearing up for what was to be an explosive decade of art, music, film, literature, protest movements, sexual emancipation and experimentation with recreational drugs. The baby boomers came into their own as teenagers, adolescents and young adults. There were 70 million of them in the US alone, leading to what has been termed by historians as the rise of a popular counter culture.

What was happening in the world, as the baby boomers traversed the stages of maturity, from babies to young adults, together with the often astounding, and disturbing, events that they were observing, was acting to bring about permanent changes to the ‘face’ and attitudes of youth around the world, but in developed Western countries in particular,

The Onset of A Cold War

Now travelling through the middle decades of the twentieth century, the Boomers were experiencing a chaotic, exciting, vibrant and slightly dangerous time to be living on our planet.

While World War II was over, it had been replaced by a new, different type of war, ‘The Cold War’. The term was invented, in a speech to the South Carolina House of Representatives, on 16 April 1947, by Bernard Baruch the millionaire and financier, who was a presidential Adviser spanning Woodrow Wilson to Harry s. Truman. 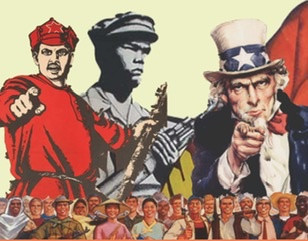 A Battle of Ideologies

Essentially, Baruch was describing a war of ideologies, which of course referred to the tension between communist and capitalist political ideologies of the two new post-war superpowers. Though never actually engaged in a direct combat action, the United States of America and the then Soviet Union, would tussle to achieve political and military superiority on the world stage, for the next 40-50 years, until Reagan and Gorbachev, between them, ended the nuclear and political standoff.

These super powers effectively fought by proxy during the latter half of the twentieth century, by supporting one, or other, of the chief protagonists in the Korean and Vietnam Wars, as well as other countless more minor conflicts in Africa and the Middle East with advisers equipment, intelligence and combat troops. These were the proving grounds for the conventional weapons arms race 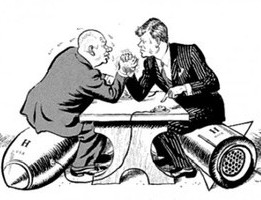 They would also compete to dominate and win the nuclear arms race, the space race and be the best at the Olympic Games, while they pursued political and economic alliances with ‘client states’ with the soles purpose of bolstering their own positions politically and geographically.

The risk of nuclear war was ever present should the two powers, ever reach a position where either state might declare a ‘real war’. There existed a constant and palpable tension, felt keenly by Baby boomers who did not want live through the horrors of the first half of the twentieth century, but simply wanted to grow up and live a peaceful life.

The beginning of the decade was marked by protests on US streets, college and university precincts. These often 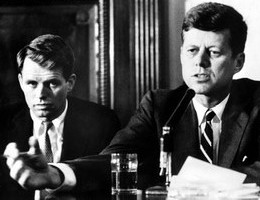 descended into violence. One of the saddest and most extreme episodes was witnessed at the US Kent State University, where four students were shot dead, by the States own National Guard troops, at an anti-war protest. Two US civil rights leaders; Martin Luther King, a civil rights moderate, and the more militant Malcolm X (Black Panther Movement) were assassinated. Also, taken tragically by assassins bullets were US President, John F. Kennedy, in 1963 and, then in 1968, JFK’s younger brother Robert (Bobby) Kennedy a former Attorney General, a then US Senator, and strong and popular potential future president.

Respect for authority, a common characteristic of youngsters, taken for granted before World War II, was now challenged, 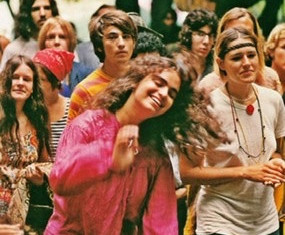 wholesale, by the baby boomers. Illegal, mind-altering drugs, including marijuana and LSD were ubiquitous. This resulted in the establishment of hippie communes and a growing interest in alternative cultures, including ancient eastern religions. ‘Flower power’ arrived in San Francisco with many young people wearing flowers in their hair, freely taking drugs and with accompanying chanted slogans, like ‘Make love not war’.

The Changing face of Art

This period of contemporary art was typified by perhaps one of the greatest exponents of the form, Andy Warhol (1928–1987), who along with his contemporaries were producing works known collectively as pop art. The term was coined by British curator Lawrence Alloway in 1955, to describe an emerging popular art form. It was a form characterised by inspiration drawn from the commercial images of the day. It served to both celebrate and often criticise, the growing phenomenon of consumerism, mass reproduction, the media and popular culture in general.

The focus of pop art was very much on simple everyday items. Mass-produced, quite ordinary, items became just as highly regarded as subjects to be caught on canvas as were the unique or extraordinary. 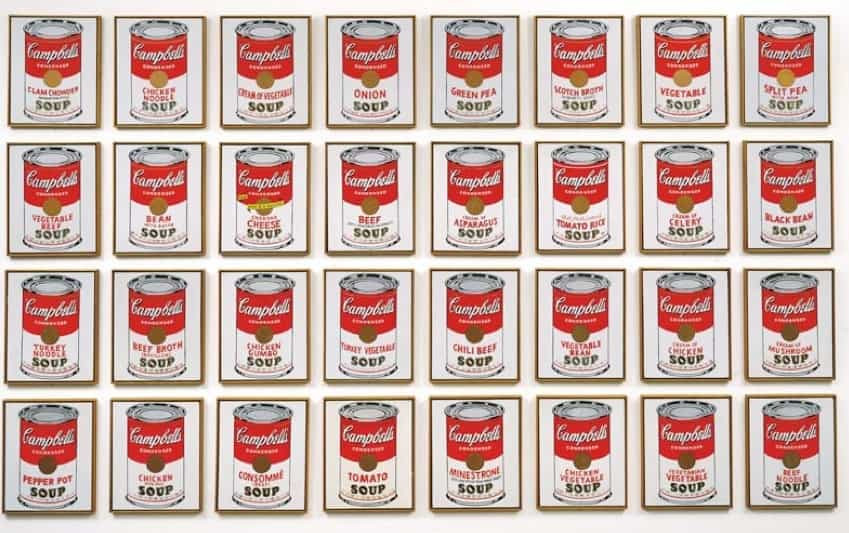 One of Warhol’s perhaps most iconic paintings, rows of cans of Campbell’s soup, exemplifies this ordinary but hugely popular art from. Where Warhol led others followed and artists began to increasingly ‘push the envelope’ of what might be considered as art. The ability or propensity to shock art audiences became commonplace a trend unabated in today’s contemporary art installations some 50-60 years later

The Decade of Popular Music

There are perhaps two high points in a decade of popular music, which could easily fill a post in its own right.

This is describes the period of the early to mid-1960’s, when a number of British rock bands and pop artists developed a mainstream following in the States and worldwide.

Many of these artists would cut their teeth covering American songs and being influenced by American Rock ‘n’ Roll and R&B sounds. As their popularity grew, they would venture into new territory, creating unique ‘British’ styles. Perhaps the most notable example when talking of the British Invasion, is of course, The Beatles had their first No1 in the US Billboard 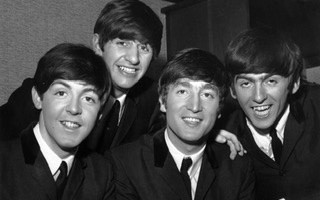 Chart in Feb 1964, with I Want to Hold Your Hand’ and they appeared on the famous Ed Sullivan Show the following day. The Beatles then dominated charts worldwide until their break up seven years later in 1970.

Beatlemania as it was popularly known was emulated by many of the up and coming artists of the day trying to cash in on the ‘Liverpool Sound’. The Beatles may easily be described as the most influential pop group of the 1960s; with an influence that has now spanned six decades, with a song book that has been covered by countless artists worldwide and left an indelible mark on the culture of Pop Music. We cannot end a discussion of British Invasion without mention of other hugely influential bands such as The Rolling Stones (many would say as influential and lasting in their own musical genre as the Beatles), The Animals, The Who, Herman’s Hermits, Tom Jones, and Donovan, all of whom had comparable success to the Beatles but left their own quite varied and different influences on the music of the day and on the following decades right up until the third decade of the twenty-first century.

The Decade would come to an end with perhaps one of the most iconic music festivals ever stage before and since. 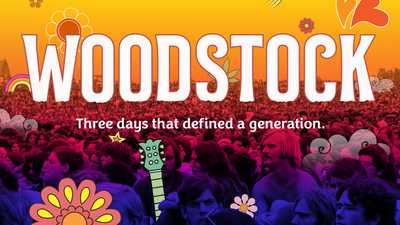 on the festival grounds were both pro- and anti-drug campaigning groups. Vietnam veterans sang danced and partied alongside pacifist protesters. There were gay and anti-gay activists and even black militants.

None of this appeared to matter as the atmosphere, was electric with artists, including Joan Baez, Jefferson Airplane, Canned Heat, Santana, The Who, Arlo Guthrie, Joe Cocker, Janis Joplin, Creedence Clearwater Revival, and Jimi Hendrix, had the crowd rocking to the music of their generation. It has often been remarked that, although this incredible mixed bag of wholly diverse, and seemingly opposing ideological groupings, were together in one place, the overall atmosphere over the 3 days was “generally one of respect, assistance, sharing and caring”. It remains as a truly remarkable cultural event, probably never again to be equaled; it was a special moment in the history of the 20thCentury.

Do You Have View?

I hope that you found this article of some interest to you. I welcome feedback and discussion on my Blog pages and I would invite you if so moved to leave your comments and opinions in the reply section below this post. I guarantee to reply within one working day.

perhaps you have fond memories or memories of another type that this article may have triggered.  We’re you actually at Woodstock?  Do you have an original pressed vynil copy of a Beatles or Rolling Stones Album; I would love to hear about it if you do.

Thanks for reading my Blog page.